A look back at the last year in Brio Entertainment19 Jan 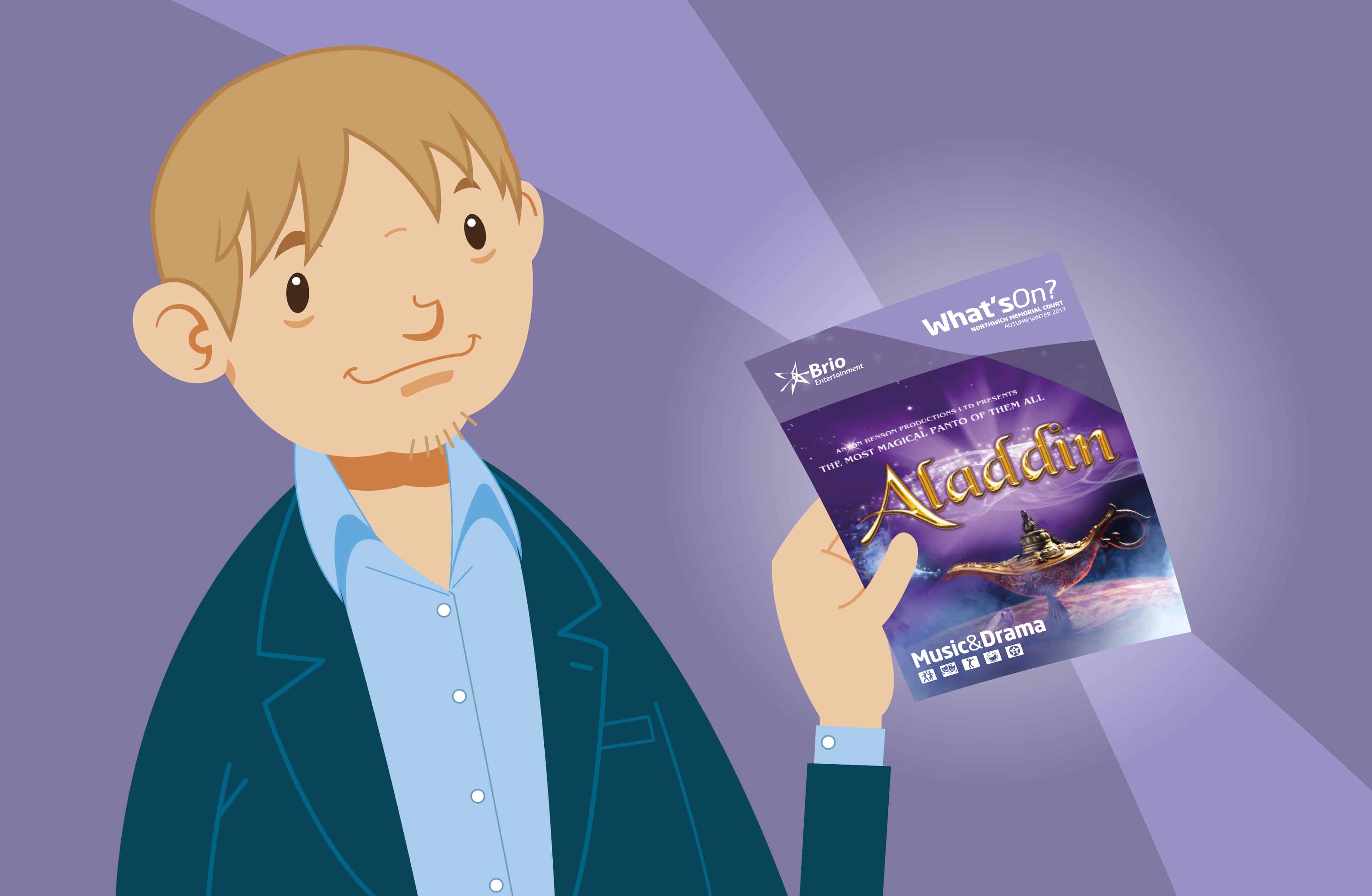 It’s been an extremely busy year over here at Brio Entertainment! We thought what better way to reminisce over 2017 and get excited about the forthcoming year, than by having a chat with our Entertainment Manager, Phil Harding? Our Entertainment Marketing Assistant sat down with him and got us this fab little interview:

Hi Phil I know you’re really busy in the run-up to panto so thanks for having a chat! Could you tell us a bit about how you came into your role as Entertainment Manager here at Brio?

It’s probably not right to say but I came into the role accidentally! I suppose it comes from my gran working at the original Memorial Hall in Northwich in the 60s through to the early 80s, so I spent a lot of my childhood in there. We used to go see a lot of the old shows, well we would sneak in! It was quite natural for me to go and work there as a casual when I was about 17, and I suppose because I was a musician at the time that led to an interest in the arts and entertainment. I left university and my band at the time had finished, so I took a job there and that’s pretty much it.

So you’ve seen a lot of shows over the years! What would you say have been some of your favourites?

I think probably panto. It was the first thing I had to deal with as a venue manager, and I had to put new pantomime company in. Not only is it financially really important, but it is young people’s first experience of theatre. It’s family-based entertainment, and it’s an essential part of Christmas! It ticks all the boxes and I love it!

Everyone loves a good panto! Bit of a cliché question, but if you could have anyone to perform or star in a show at one of your venues who would it be?

Anton [our pantomime producer] always says: ‘We’ll know we’ve made it when we get Biggins in panto!’ He is definitely someone we would love to have in panto! We’ve spent a lot of years chasing Paul McCartney, because The Beatles played at Neston Civic Hall, they played here [Ellesmere Port Civic Hall] in 1963 and they played six times at the old Memorial Hall! So in terms of the ultimate person to come back for a revisit, it would have to be McCartney, but we’ll take Biggins!

I would definitely want to be on the guest list if Paul McCartney came to Brio! You’ve met a lot of different characters over the years, but what would you say your biggest claim to fame is?

There are quite a lot of very famous people who we saw on their way up. We had Michael McIntyre the year he really had his break! He did his Edinburgh Fringe Show at the old Memorial Hall, and played to 75 people in the small room! He then went off to Edinburgh with his show, did Live at the Apollo afterwards and very soon had his own show. I think my favourite though was Patrick Moore the astronomer, he was such a lovely man and had an amazing mind, I’ve never met anyone so good with numbers! He was a great guy and an absolute genius, I remember being quite stunned by how intelligent he was and how he held all that information in his mind!

I wish I had been here to see Michael McIntyre! This question came from a few of the marketing team: ‘Over the years have you had any strange demands or requests from any stars?’

Disappointingly, no! I’ve been wracking my brain trying to think of something, but there were lots of weird superstitions and things going on in the world of actors over the years! We had a panto cast member at Winsford years ago who would wear the same underwear for every show (I won’t say who!), and that was a big concern when we extended the run from 5 days to 12! I can tell you that Midge Ure from Ultravox doesn’t like mayonnaise on his sandwiches! I can give you loads of random ones, but sadly no blue M&Ms!

I really hope none of this year’s panto cast does the same! As we come up to the end of the year what would you say your highlights of 2017 have been?

So many! We’ve got Chubby Brown coming up and it’s just sold out this week, and it’s always really exciting to see a show sellout at Ellesmere Port Civic Hall (EPCH)! Establishing the ballet at Northwich Memorial Court (NMC) was great especially as it’s a really important part of the programme, and the Vienna Festival Ballet is wonderful. Our Easter panto, with Gareth Gates was really entertaining and that was across two venues – EPCH and NMC. Our social media has really grown over the past few months, and it’s been really exciting watching the EPCH page gain more followers, and the team have really got involved with continuing to grow our following! The Manford’s Comedy Clubs have continued to be a success, and we’ve had some amazing special guests including Russell Kane at our first Neston show, and Jason Manford visited EPCH! The Charlatans also did their pre-production over at NMC which was really cool. So yeah, 2017 in general has been a great highlight!

It sounds like you had a very busy year! We’re so excited to see what’s coming up in 2018, what can we expect?

We are looking forward to more of the same, and a whole raft of new things! We’re going to have return visits from Circus of Horrors and Knutsford Musical Theatre are back, this time to perform Oliver! which will be brilliant. I’m really looking forward to the Easter Panto of Alice in Wonderland at NMC, it’s got a fantastic line-up, we’ve got Ashleigh and Sulley the dog and Dave Benson Phillips! We’ve also added some really cool new shows including The Chicago Blues Brothers, The Bowie Experience and Jamie Raven the magician and finalist from Britain’s Got Talent is coming to perform in September! We can’t reveal too much yet, but in May we’re hoping to have some very exciting guests coming to NMC! As you can see it’s going to be another really busy year!

Thank you Phil! We hope 2018 is another great success!

You can find out all about our upcoming shows and book your tickets online here.