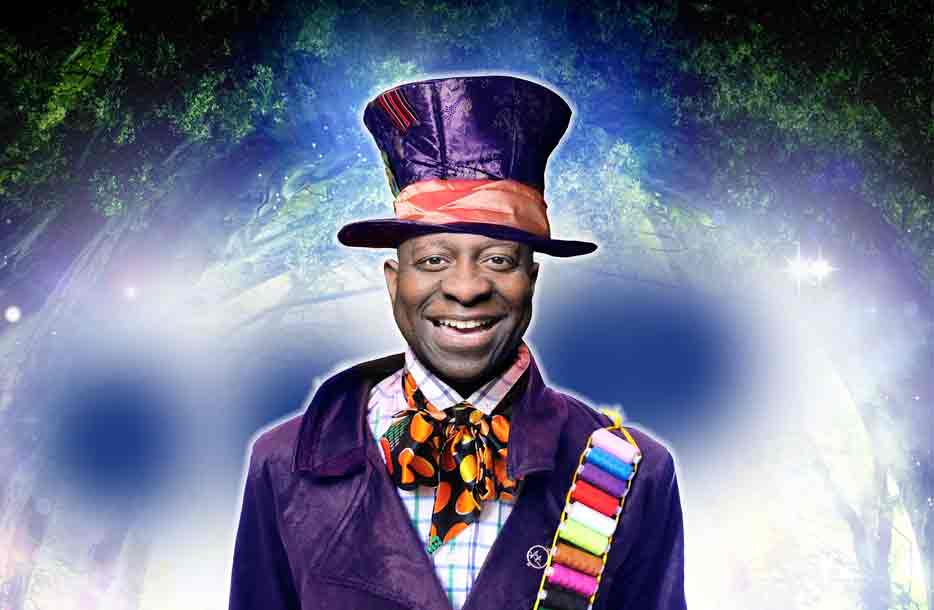 As our Easter panto season quickly approaches, we got to have a chat with the wonderful Dave Benson Phillips about what he’s been up to and how he’s been preparing for his role as the Mad Hatter!

Hi Dave! No doubt you’re really busy in the lead up to panto! What other projects have you been working on? We’ve seen from your Twitter that you’ve been working on a Mockumentary, could you tell us a bit more about that?

We’ve just about finished the Mockumentary [Getting Back with Dave Benson Phillips] and we’re in the process currently of publicising it and writing the next series, even as we speak we’re just trying out some new ideas. We didn’t realise that our first flurry into it that it was going to be such a big success so we’re very pleased about that. At the moment all my plans and all my energy will all be diverted into doing Alice in Wonderland!

Amazing! It sounds like you’re very busy! You were here at Northwich Memorial Court a few years ago performing in Jack and the Beanstalk, are you looking forward to coming back for Alice in Wonderland?

Yes! Under the circumstances that I was there before I was there to replace one of the performers who dropped out of the pantomime itself so I had to go in with 24 hours notice! It was all very exciting!

Oh wow! Well we had fabulous reviews of Jack and the Beanstalk so it was all put together very well! Did you enjoy working on the show?

I did! It was one of those things when you go in like that it’s enjoyment on another scale because of course you’re going in with a cast and they’ve all been around each other for a while, a lot longer than I was when I joined them! The show was fully fledged and they had all established really good relationships and had a rapport with each other but it was lovely to do! On this occasion, I will be going up there and will be a part of the cast from the off!

You definitely saved the day! How are the rehearsals going for Alice in Wonderland?

At the moment, I’m still based down south so my rehearsals are currently consisting of reading scripts through and just learning the songs. What I tend to do is put them on a tape because I’m very old fashioned like that! And I start to learn the show as I’m trodding about and doing my own bits and pieces, so that’s what I do. I’ll be going over my lines and of course when I go join the rest of the company in a couple of days from now when we start rehearsals properly, so anything I can do beforehand will help rehearsals. That’s my rehearsals right now!

We can’t wait to see the show all put together! And how good does that cast line up look? From yourself to Ashleigh and Sully, it’s going to be a phenomenal show!

We’ve also got Leslie Ash starring as well, I’m very excited about that because I used to look at her from afar, and now I get to look at her close up! Haha, I hope I don’t creep her out!

We’re sure you won’t! How do find being on stage compared to being on TV and presenting?

I started on stage as a lot of performers often do, I started off performing in school shows, and then people realised that I was bitten by the stage bug! I found myself working as an usher in a children’s theatre, not far from where I live down in London, a place called the Polka Theatre (look it up it’s very good!) and it was there where I really realised that I wanted to do this full time. Some people took me on, gave me an unofficial apprenticeship and I learnt all aspects of the business, not only the art of performing but how to run a theatre, various jobs, mathematics, accounting, so I learnt all of that stuff which some people would consider boring but it’s actually very necessary for a theatre to work. To cut a long story short there was a lot of stage before television! And then I went into television, and to tell you the truth, as long as there’s a bunch of people watching me I don’t mind where I perform!

There is a lot of stuff that goes on behind the scenes in the theatre! If you could work on any show, whether on stage or in any movie what would it be?

Oh goodness me! Now you’re asking! Well to tell you the truth to have that choice that’s enough! Because for a lot of people we don’t get to do that! But if I had to choose I would love to do an action movie version of Sesame Street! Apparently, Mrs Phillips wants me to do Black Panther 2!

We would definitely love to see you on the big screen doing Action Movie Sesame Street and Black Panther 2! Have you any other projects coming up after you finish the panto?

Well, I’ve got to host some 80s events with my friend Pat Sharp! There’s also the vlog, Getting Back with Dave Benson Phillips so we’re getting ready for that. I’ve also got my own channel called WebbyTelly where I’m trying out loads of new ideas for prospective shows on it! It’s on YouTube, so check it out!

We’ll definitely have to have a look! Thanks for having a chat with us Dave! We can’t wait to see what’s in store at Alice in Wonderland!

Alice in Wonderland arrives at Northwich Memorial Court on 23-24 March, all times and tickets can be found here.