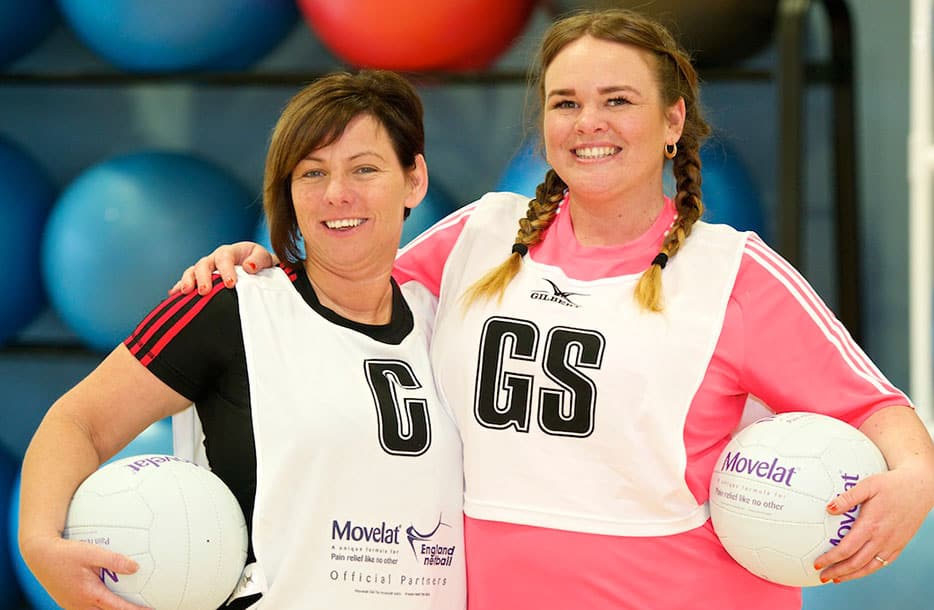 As part of a new drive to encourage women back into sport, we’re looking for women who used to enjoy playing netball to give the sport another go!

We’ve joined forces with England Netball to launch weekly Back to Netball sessions at Ellesmere Port Sports Village, aimed at those who may not have played the game for many years. The sessions are perfect for those who perhaps played netball when they were younger but had to stop due to work or family commitments. They’re particularly popular with women who want to improve their fitness, but also miss the social side of netball!

Anneka O’Connor, Cheshire’s Netball Development Officer, said “Back to Netball is a great way to exercise and is ideal for those who haven’t played netball in a while. These are fun sessions with a friendly coach. We do warm ups, skills training to help remind players of the rules, mini games and full court matches before finishing off with a cool down,”.

Cousins Joanne Edwards and Sammy Freeman (pictured) have been taking part in Back to Netball sessions for four weeks and are already seeing the benefits. Neither had played the game for more than 20 years.

“I was scared to go to the gym because I was overweight. Now I’m playing netball twice a week and have lost a stone and feel amazing. The first week I was shattered but I would urge everyone who enjoyed netball at school to give it a go. You soon make friends and it’s really good fun,” said mum of one Sammy, 29.

Joanne, a 43-year-old carer and a mum of two, added: “I played netball when I was younger but stopped when I left school. I’m really enjoying getting back into the game. You feel better for doing something and everyone at the sessions is in the same boat. I’m loving it and would tell others to give it a go.”

The sessions are just £3.50 each and as well as the Thursday Back to Netball evenings, we’re also offering a Netball Now session on a Tuesday for those who want to simply ‘drop in’ and play occasionally. Additionally, we’re looking to introduce Walking Netball sessions for more mature women who want to play, but at a more leisurely pace. If that sounds like something you or someone you know would be interested in, shout about it in the comments below!

Kerry Graham, Centre Manager at Ellesmere Port Sports Village said: “We are always looking at ways in which we can encourage people to improve their health and fitness though sessions such as these.

“Back to Netball is the perfect way for women to enjoy exercise through a fun team sport and also enjoy some social time with others. Don’t be scared, come and give it a try,” she added!

You can find out more about the sessions here.